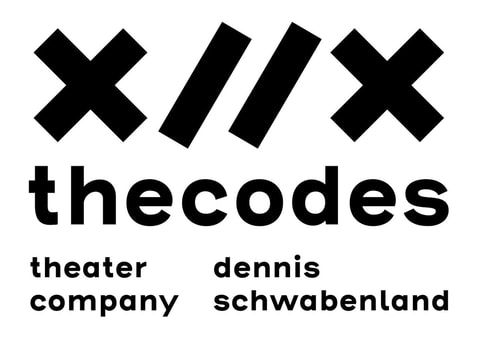 thecodes is the theatre company around director and actor Dennis Schwabenland and a changing constellation of artists.

thecodes wants to raise a voice for people who otherwise would not be heard. The aim is to bring people into the theatre who are losing access to it more and more, or who never had access to it, and to show them perspectives on how they can become socially involved.

The productions should have a current political reference: They often deal with issues of social injustice, the struggle against one-sided representation in society or the new challenges posed by digitalization. The works see themselves as laboratories for a future coexistence.

Classical, literary or cinematic models are used and given pop-cultural references, access to the themes should be easy, codes are used to which the audience refers, which are familiar to them and about which they can reflect through the newly created contexts.

thecodes works with different artists*, organizations and theatres in different constellations. Collaborations are sought that are partly based on long shared experience, but new artists who bring their own view of things and their own codes are also to be included.
Currently, for example, alongside Dennis Schwabenland as the core of the current project GILGAMESH ORIGIN (AT): Magdalena Nadolska and Daniel Mezger